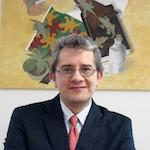 David Arellano-Gault (Ph.D. University of Colorado) is Professor at the Public Administration Division at Center for Research and Teaching in Economics (CIDE) in Mexico City. Currently he is also the Director of the Public Administration Department and was CIDE’s Provost (2008- February 2013).  Among his recent publications it is worth to mention the following book and paper: “Can we reduce the levels of corruption in Mexico?” published in Spanish by CIDE in 2012 and “The Evaluation of Performance in the Mexican Federal Government: A Study of the Monitoring Agencies’ Modernization Process”.  Public Administration Review 72 (1). 2011 David is Senior Editor of Organization Studies and was editor of the academic journal Gestión y Política Pública (Public Management and Policy indexed by SCCI) from 1997 to 2013 and coeditor of Organization Studies (2008-2013).  David serves also in different journal boards like ARPA and JPART. He is currently preparing a second book on Corruption in Mexico, dealing with the challenges that the systemic and networking corruption produce in countries like Mexico and others in Latin America. Google Scholar